How to work the situation out with a customer who does not know a language and calls a professional translation made by a qualitative translator a machine-made one.

Manager work at translation agency requires steel nerves and endless patience. Despite a gigantic daily amount of work, we are always open and polite with our customers. But sometimes certain customers for their own profit and free translation can do anything.

Not long ago a woman came to our translation agency that needed a Spanish translation. The document itself was not very big; it was about a foreign payment system, which in Ukraine was unheard and unknown to anyone. 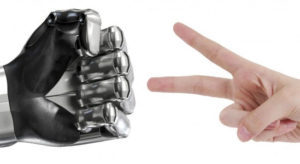 Before living our office, this woman gave us a hint that this translation must not be made in Google, it has to be simple and clear, so that she will have to be able to understand it immediately; she also warned us that it will not end on just completing our work. In turn, I gave this order to one of our best translators, who our translation agency works with for many years by now.

The next day the customer came for her translation. As she read it, she still failed to understand how that foreign system works, so she made a huge scandal out of nowhere and started to muddy a translator, who she had not even ever seen. She believed that she has a trump card, in the form of an argument: “This is a machine translation, because I do not understand anything.” She refused to pay for the translation and continued to shout about her rightness. The only way out of this situation was a call to the translator, who was carrying out this order and in turn was already faced with the description of the work of this payment system, which could explain to the lady how everything works. After an hour of talking with an interpreter, the woman did not ask for forgiveness from anyone with whom she quarreled, although the truth was not on her side. By continuing in the same passive-aggressive tone, she left the office with the words “Now I’m happy with the translation,” although the translation remained the same, she was just explained the principles of the system she was interested in. Everyone sighed with relief and hoped that she would forget the way to our translation agency.

Such cases are not uncommon. Many professional translators complain that due to the presence of an affordable machine translation, customers often think that they are being deceived. In order to understand the difference in these types of translations, you need to know the most radical departures.

Machine translation is a statistical principle of information processing. It is based on the use of various data presented on the Internet. The machine takes all the data and organizes them into the best language combination, according to the system itself. This system cannot perceive a large number of auxiliary factors and very often after machine translation the meaning of the text is completely different from the one that was in the original. The machine always performs a sequential translation word for word, without taking into account cultural and emotional differences, which leads to difficulties in the perception of such a translation.

History shows that people – translators were long before the advent of computers. When it was necessary to translate the decree of the emperor or the king, he was given to an interpreter, who knew the necessary foreign language, he also served as editor. Sometimes there were situations that it was necessary to participate another translator, he could be searched for a long time, as in ancient times a small number of people owned foreign languages.

If the translation is performed by a person, you can always be sure that the expert thoroughly knows the topic, is a qualified language expert, understands cultural differences and always uses a creative approach to any text, even very difficult.

In respect to a translation that has specialized subjects, then only an interpreter who has the necessary knowledge of terminology and the specifics of the subject text is able to fulfill such an order. Sometimes the texts consist of sentences that are difficult to comprehend, in such a situation, a person-interpreter who is an expert in the proper use of the language – can transform the speed of one language into another. Transform all the nuances of the structure, style, tone of the text, so that the text does not lose its meaning, only a translator can do. Not the least role in translating texts is played by the cultural component. Each language has an attachment to the culture of one or another people, to its customs and the rules of using idioms and acronyms, for example. Only a person can tactfully translate such texts so that the translation does not offend the reader. Each translator has a creativity that helps to choose the most acceptable variant of the translation, using not only knowledge and experience, but also understanding the language.

No machine is capable of the above actions, no machine can put its soul into the translation and make it perfect, the machine can only translate all the words in a row. Only thanks to the person-translator you can feel all the colors of the language, when you do not know it.

How to work the situation out with a customer who does not know a language and calls a professional translation made by a qualitative translator a machine-made one. обновлено: June 8, 2017 автором: azurit
Tweet
Звоните! ☎ +38044 222-96-89