What is easy and simple in Chinese language?

As of now a Chinese language can be accessed by more than one billion people. It is official in the People Republic of China, and is also used in Indonesia, Malaysia, Cambodia, Vietnam and other countries. It is a part of Chinese and Tibet language group. Chinese language has seven dialects, which can be determined by their phonetics that complicates the understanding between dialects, as well as some minor differences in lexica and grammar. For users of different dialects to communicate there is a standard Chinese language – Putonghua, which in term is a phonetic norm and a literature language. It is Putonghua that foreigners study as a Chinese language, which they later use to work with translation agencies.

Despite the fact that the plantifulness of the Chinese language lies in the number of its dialects, they prevent China from using a single language that all people would know.

Chinese language is not very different from any other foreign language. It has its difficulties in understanding, but it also has its easy spots. The first thing to remember is the fact that it has no alphabet, no declension and conjugation, each hieroglyph is a ready word and sometimes a phrase. Due to the use of hieroglyphs there are no punctuation marks in China. Such grammar makes learning Chinese language easier. 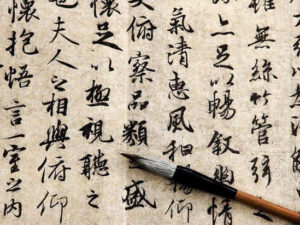 To read a newspaper in Chinese language, it is necessary to know at list three thousand hieroglyphs. Hieroglyphs greatly differ from writing systems of other languages, which is due to the fact that they are one of the most ancient writing systems on Earth. Hieroglyphs are more than four thousand years old and that is why they are unique and are the only way to keep traditional aspects of the Chinese language.

Hieroglyphics saw a lot of changes during many centuries of its existence. The most important change happened at the down of the twelfth century, when Chinese people understood that their writing system is very complicated and not every man can understand, learn and use it. Soon after for writing all texts they began to use a normal spoken language, which made perception of a text much easier. The most important event for a Chinese language was transferring to simpler hieroglyphs that happened in 70-th years of the twenties century. As of now in the People Republic of China everyone use simple hieroglyphs, which amounts to, approximately, six thousand symbols.

One should not forget about tints in Chinese language, which sometimes can be a problem for foreigners. There is a certain tint for each syllable, which is called an etymologic tint of a syllable. Put simple, it is a change in the pitch of a voice, which helps to influence the meaning of the phrase. Another interesting fact is that one and the same hieroglyph, if read with different intonation, can have various meaning.

Chinese language is believed to be one of the most difficult languages in the world, but it only looks like that. In reality only a man who did not run into it can believe it. For a Chinese language to become simple, it should be studied every day for quite a lot of time. Using an associative method of understanding hieroglyphs will simplify their learning a lot, as well as timely correcting of hieroglyphs spelling and pronouncing, all this will help to avoid complications in constructing sentences.

For many modern people Chinese people have the same face for all of them and do manufacturing goods, usually, of not a good quality, which they deliver in any spot of the Earth and finally, it people, who talk incoherently and loudly, their speech is horrible to the ear of European people. For most Europeans China is a country of economic development, demographic boom and life philosophy.

Many people joke about the number of hieroglyphs in Chinese language, which have nothing to do with writing. About using different intonation for one and the same word and how it influences its meaning and a lot of other moments, which are inconceivable for our people. But no one will make jokes or argue about the fact that Chinese language belongs to one of the most ancient nations of the world and is a source of history and unique culture. There is an opportunity to see for a small bit how people lived before us many centuries before by learning this language.

Chinese language plays a huge part in the modern world. The rise of its popularity has a lot to do with improvement of Chinese – America relations. It was then that the world saw a mysterious country that became more and more accessible with every passing year. Popularity of its language is rising; interest to it becomes larger and larger. It attracts with its variety, keeps a huge amount of incredible knowledge, which one wants to consume. It is a peculiar world, which requires thorough learning. Everything speaks of the fact that Chinese will stay one of the most promising and popular languages for a long time.